Doubling up research and recognition 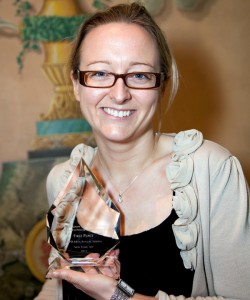 For Dr. Brega Howley, assistant professor in the Department of Pediatric Dentistry, the hardest part of completing her award-winning thesis research was actually getting patients to come back in for follow-up appointments.

That part of Howley’s research may sound somewhat rudimentary, but because her findings revealed the success rate of pulpotomies versus pulpectomies, evaluating patients after procedures was crucial to the outcome of her thesis.

Howley’s research, gathered over the course of three years at Boozer Dental Works in Tyler, Texas, chronicled the condition of patients in six-month intervals for two years. It also won Howley two awards at the American Academy of Pediatric Dentistry’s 64th Annual Session in New York City in May.

She claimed first prize in the poster research competition for her poster titled “A Survey of Pulp Treatment Choices by Pediatric Dentists in Primary Anterior Teeth” as well as the 2011 Nu Smile Graduate Student Research Award for her research titled “Pulpotomy versus Pulpectomy for Carious Vital Primary Incisors: A Randomized Controlled Trial.”

The most eye-opening part of Howley’s research: “We found that there was no difference in success rates in these incisor pulpotomies and pulpectomies,” Howley says, specifically referring to the procedures for asymptomatic vital primary incisors with large carious lesions.

After sending out a postcard survey to pediatric dentists, Howley uncovered some interesting findings.

“The postcard survey revealed that the most frequently given reason for performing pulpectomies on carious vital primary incisors, by surveyed pediatric dentists, was that they were taught to do so in their pediatric residencies,” says Howley, who completed her residency at Texas A&M Health Science Center Baylor College of Dentistry in August 2010.

The trend is not without its implications, she says.

“Given the available scientific evidence and our investigation’s findings that there was no significant difference in the success rates of pulpotomies and pulpectomies, the teaching of pulpectomies for vital incisors by some pediatric residencies could be considered over-treatment,” she says.

Fortunately, Howley was not completely alone on the research front. The doctors and staff at Boozer Dental Works were instrumental in tracking down patients and facilitating the randomized controlled trial. Back in Dallas, Dr. Suzi Seale, Regents Professor, served as Howley’s mentor through the entire project.

She also had help from TAMHSC-BCD faculty serving on her thesis committee, including Chairman and Graduate Program Director Dr. Alton McWhorter, Assistant Professor in Pediatric Dentistry Dr. Carolyn Kerins, and Regents Professor and Chairman of the Department of Diagnostic Sciences Dr. John Wright.

After years of research, Howley says she feels honored for the recognition.

“I was delighted, not only for the awards, but also that the Baylor Department of Pediatric Dentistry was getting recognition for all the work that it puts into research and poster presentations,” Howley says.